TORONTO: 18 Aug. 2016 — Despite Canada’s wealth management industry promoting a goals-based approach to advice, nearly half of full service Canadian investors say their advisors fail to deliver on even the first stage of that process, which helps them set goals that reflect their risk tolerance, according to the J.D. Power 2016 Canadian Full Service Investor Satisfaction Study,℠ released today.

The study identifies three broad stages of goals-based investing: setting personal goals; implementing a strategy to achieve those goals; and monitoring progress. Only slightly more than half (54%) of investors indicate their advisor helped set goals and discussed risk. Barely one-third (34%) say their advisor effectively delivered on all three stages.

“These results don’t speak well for the industry as a whole,” said Mike Foy, director of the wealth management practice at J.D. Power. “Investors have some newer, more compelling lower-cost alternatives available to them, including robo-advisor. In addition, with CRM2-mandated fee disclosures beginning to roll out, many investors will be learning for the first time exactly what they have been paying for. Advisors who aren’t adding value for their clients beyond asset allocation may be in real trouble.”

In addition to changes in technology and regulatory requirements, wealth management firms are contending with shifting investor demographics and psychographics. Younger investors have a different set of preferences and expectations than older investors. J.D. Power research shows that 42% of Millennial[1] investors want to play a more active role in the management of their wealth than previous generations. These so-called “validators” want to make their own decisions but still have access to an advisor for guidance and to act as a sounding board. Older generations such as Boomers are more likely to describe themselves as “collaborators” or “delegators,” who defer to their advisor’s judgments and decisions.

“Wealth management firms and advisors must be cognizant of the increasing prevalence of the validator investor mindset and the challenges it presents,” Foy said. “It doesn’t necessarily mean advisors become less important, but the role they play for investors may be different. They can’t just manage portfolios—the best advisors of the future will need to be part coach, part teacher and part financial therapist.”

Following are additional findings of the 2016 study:

Edward Jones ranks highest in investor satisfaction with full service investment firms in Canada for a fourth consecutive year, with a score of 802 on a 1,000-point scale. Edward Jones’ performance is highest across all four of the most critical factors driving satisfaction: financial advisor, account information, investment performance and product offerings. Following in the rankings are Raymond James Ltd. (779) and HollisWealth (776).

The study measures overall satisfaction of investors who J.D. Power defines as “full service.” This group includes investors who receive a range of different service levels offered by various full-service brokerages and wealth management firms included in this study. In previous years, only TD Wealth’s Private Investment Advice clients were included in the study; this year’s study was modified to include a wider range of TD Wealth clients. Because of the change in methodology, TD’s overall year-over-year scores cannot be directly compared.

The study is based on responses from 5,159 investors who use advice-based investment services from financial institutions in Canada and was fielded in May and June 2016. 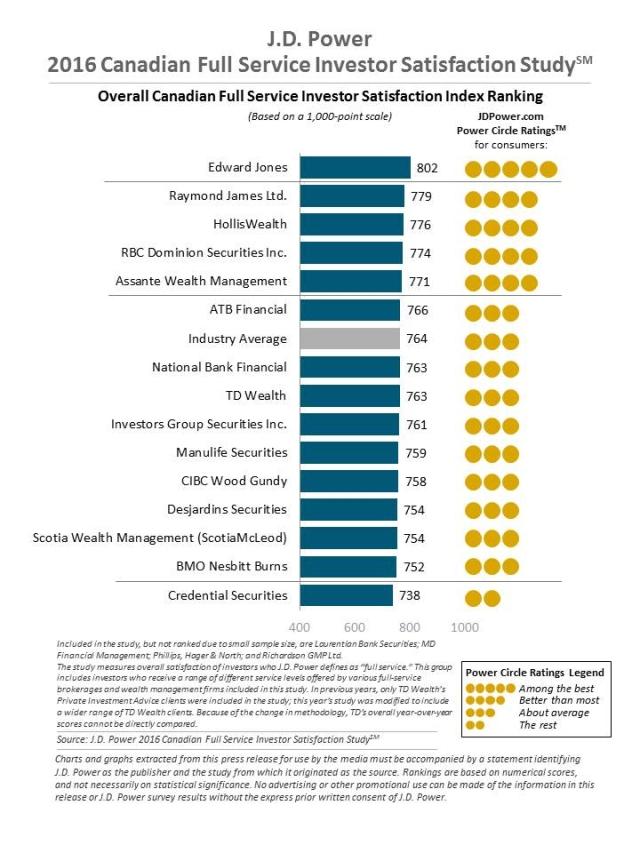 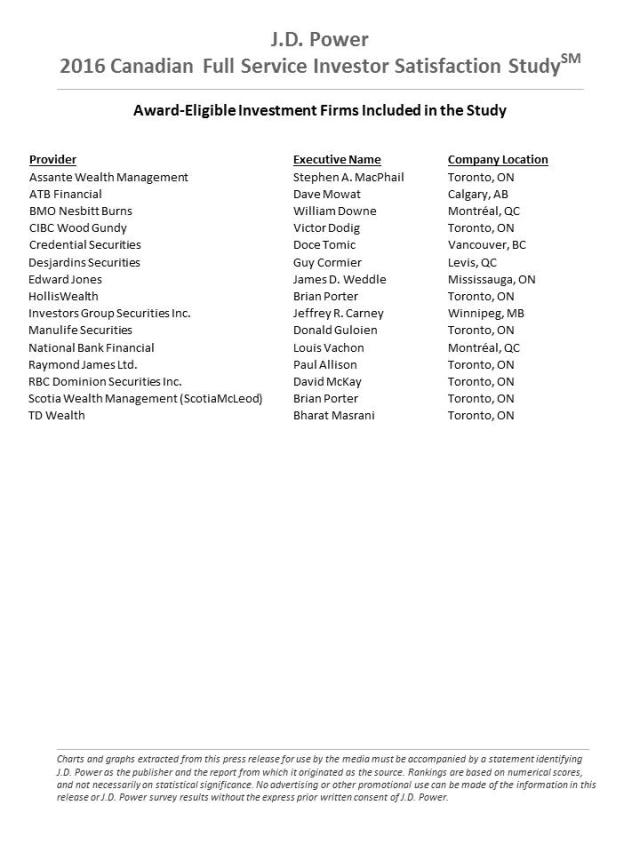