TORONTO: 13 Sept. 2018 — Customer satisfaction with self-directed investment firms is lagging among investors in Canada when it comes to mobile experience, according to the J.D. Power 2018 Canadian Self-Directed Investor Satisfaction Study.SM As nearly two-thirds (64%) of investors do not use their firm’s mobile app and fewer than one-third (31%) say they have a complete understanding of available mobile services, overall satisfaction is lowest in this channel (742 on a 1,000-point scale), compared with satisfaction in the online (774) and phone (779) channels.

“Investment firms in Canada in general are significantly behind the curve when it comes to their mobile app offerings, capabilities and customer engagement,” says Mike Foy, Senior Director of the Wealth Management Practice at J.D. Power. “Investors are increasingly looking to mobile platforms, not only for convenient trade execution but also to access account information; do research; transfer funds; use planning tools; and receive customized alerts and notifications from their firms. Firms that can deliver a robust and intuitive experience—ideally integrated across investment and other financial needs such as banking—will have a huge advantage over competitors.”

The low satisfaction level associated with self-directed investment apps is even further evident in comparison with the retail banking sector in Canada, in which 49% of customers have adopted bank mobile services, and the mobile channel has the highest satisfaction level among all channels (832).

“Taking into account how critical mobile is for consumers and considering where the next pool of investors will come from, it is critical for self-directed investment firms to focus and improve their mobile offerings and user experience, as this is the channel Millennials and younger generations will use,” Foy added.

The 2018 Canadian Self-Directed Investor Satisfaction Study was fielded in May-June 2018 and is based on responses from more than 2,100 investors who do not work with a financial advisor at their primary investment firm. 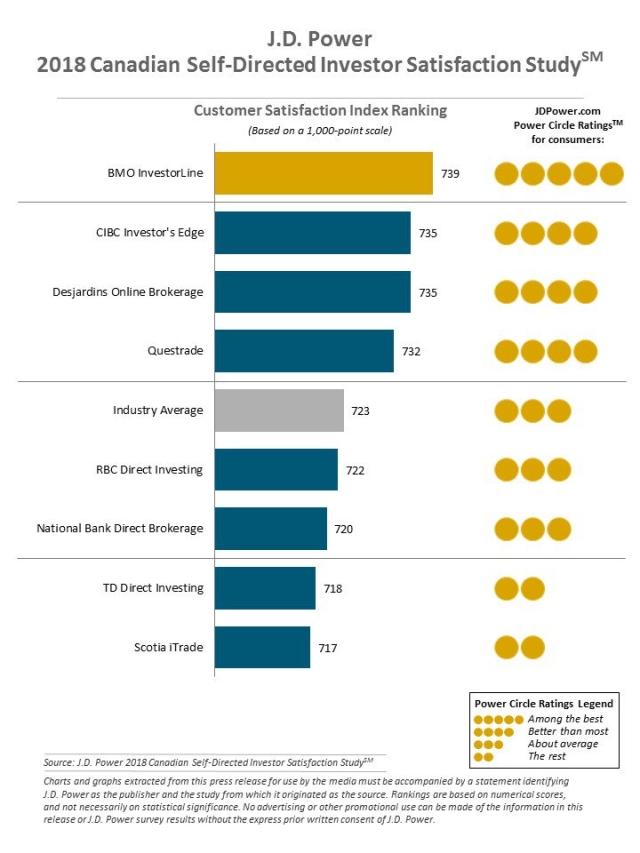