Millennials in Canada Have Strong Interest in Robo-Advisors

TORONTO: 26 Sept. 2016 — As many current self-directed investors show a strong interest in receiving more guidance from their firms, robo-advisors may provide a viable, low-cost alternative to going it alone or working with a traditional full-service advisor, according to the J.D. Power 2016 Canadian Self-Directed Investor Satisfaction Study,SM released today.

Robo-advisors provide automated portfolio management services at a relatively low cost. While several firms already offer such services, there still is limited investor awareness and understanding of this alternative.

“The robo-advisor market in Canada is still relatively small, but there are a number of factors likely to drive continued growth,” said Mike Foy, director of the wealth management practice at J.D. Power. “Millennials are now the largest segment of the workforce and are not only more comfortable than their parents with technology-based solutions, but they are also more likely to be looking for guidance as they accumulate wealth and their financial lives become more complex.”

According to study findings, the appeal of robo-advisors is highest among Millennial investors,[1]  66% of whom indicate they would be interested in robo-advice if their firm offered it, compared with 54% of all investors. The percentage of Millennials who indicate they have actually used a robo-advisor is nearly double that of the overall market (11% vs. 6%, respectively), and among those Millennials who have used a robo-advisor, 54% are either equally satisfied or more satisfied with their robo-advisor experience as they are with their primary self-directed firm.

The study also finds that despite all the attention on Canada’s Client Relationship Management (CRM2) regulatory initiative to drive investor transparency, little-to-no progress is evident in terms of increasing investor understanding of fees.

“The needle really hasn’t moved in five years,” Foy said. “In 2012, only 39% of self-directed investors said they completely understood the fees they were paying, and in 2016 it’s still 39%. Increased disclosure does not automatically create transparency. Firms need to ensure they are explaining information effectively, as we see a very strong correlation between understanding and satisfaction when it comes to fees.”

Following are additional findings of the 2016 study:

National Bank Direct Brokerage ranks highest in self-directed investor satisfaction for a second consecutive year, with a score of 774 (on a 1,000-point scale), and performs particularly well in the interaction, account information and product offering factors. Following in the rankings are BMO InvestorLine (762), CIBC Investor’s Edge (751) and RBC Direct Investing (751).

The 2016 Canadian Self-Directed Investor Satisfaction Study, now in its eighth year, measures investor satisfaction among those who do not work with an advisor for their primary account with their  brokerage firm across six key factors (in order of importance): interaction; account information; trading charges and fees; product offerings; information resources; and problem resolution. Scores are calculated on a 1,000-point scale. Due to methodology changes to the study, previously known as J.D. Power Canadian Direct Brokerage Investor Satisfaction Study, results from 2016 cannot be compared to previous years.

The study includes responses from more than 2,800 investors who primarily invest with self-directed investment platform providers in Canada. The study was fielded from May through June 2016. 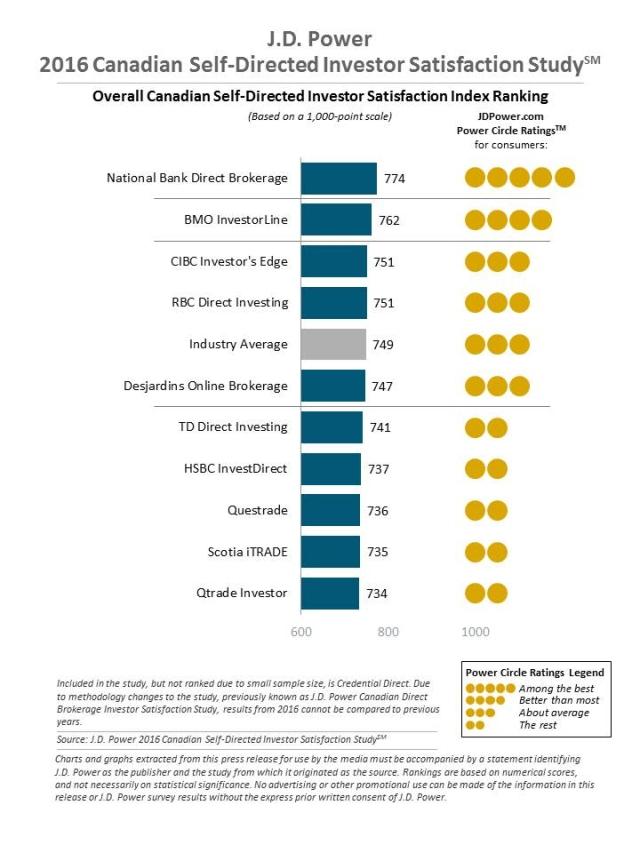 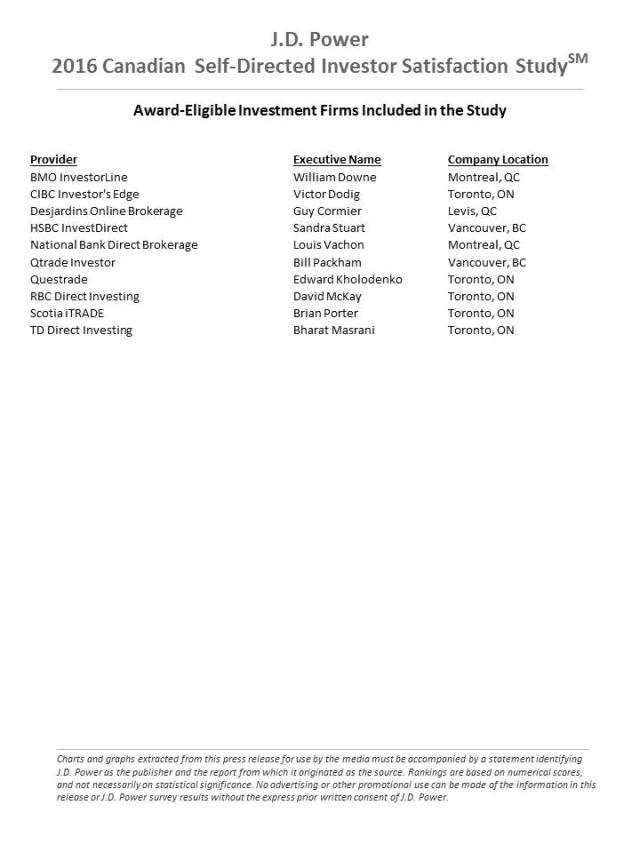