TORONTO: 26 May 2015 — New-vehicle dealers in Canada are reporting record sales but are trying to increase profitability while facing some economic headwinds. Now more than ever they want their auto finance providers to be a business partner rather than just a lender, according to the J.D. Power 2016 Canadian Dealer Financing Satisfaction Study,SM released today.

Vehicle sales in Canada continue to rise, with some of the growth being aided by low interest rates and extended terms, which have improved consumer affordability. While low rates and extended terms are supporting dealership sales, each has the potential to negatively impact lenders’ margins and portfolio risks. Low interest rates and extended terms have supported the dealer sales growth, as the average amount financed (vehicle manufacturer's suggested retail price—MSRP) has increased to $37,794 CAD in 2016, up from $27,566 in 2010, according to data gathered by the Power Information Network® (PIN) from J.D. Power. Additionally, average loan terms from bank lenders has increased over the same period to 78 months from 69 months, while term lengths from captive financing companies have extended to 69 months from 59 months, according to PIN.

While the dealer sales volume has increased, new-vehicle profitability has declined, and the economic horizon for Canada has some headwinds from declining oil prices and purchasing power.

“Faced with declining profitability and the economic headwinds, dealers want their lenders to be collaborative business partners that will help them focus on the things that drive profitable growth without impairing their ability to sell vehicles,” said Mike Buckingham, senior director of the automotive finance practice at J.D. Power.

From that business partnership, dealers want personalized service from their underwriting/funding and sales teams to help them manage their credit and expedite consumer applications and funds. Dealers are increasingly concerned about customer satisfaction and rely on their lender partners to aid them in speeding up the sales, financing and vehicle delivery processes.

“Sales representatives are integral to the dealer-lender relationship,” said Buckingham. “To make that relationship strong requires that the lender’s rep make frequent contacts with the dealership, understand their business, provide insights on current programs and help the dealer resolve financing issues.”

The study finds that 60% of dealers say their prime retail credit (PRC) sales reps facilitate contract problem resolution. When that occurs, overall dealer satisfaction with their PRC lender increases by 97 points (on a 1,000-point scale). Similarly, nearly half of dealers say their sales reps provide dealership performance consulting and facilitate restructuring of applications, which lift PRC satisfaction by 95 and 93 points, respectively. Additionally, 69% of dealers indicate that they are always able to reach their credit staff when needed, which boosts PRC satisfaction by 104 points.

Dealers want problem solvers in both the sales reps and underwriters. For finance and insurance (F&I) managers, that means occasionally granting exceptions to get their customers the financing needed to make the sale. These requests don’t often occur; in fact, dealers request exceptions an average of 10% of the time. When those dealer requests are granted at least 50% of the time, it lifts satisfaction by 80 points.

“In a highly competitive market like Canada, time is of the essence,” said Buckingham. “Dealers want to be able to get quick funding, as any delay can lead to a lost opportunity, with the customer walking out the door.”

The 2016 Canadian Dealer Financing Satisfaction Study captures nearly 6,400 finance provider evaluations across the four segments. These evaluations were provided by more than 1,200 new-vehicle dealerships in Canada. The study was fielded from January through  March 2016.

[1] No awards are presented in the retail leasing,  floor planning and non-prime retail segments due to insufficient market representation of the respective segments in the 2016 study. 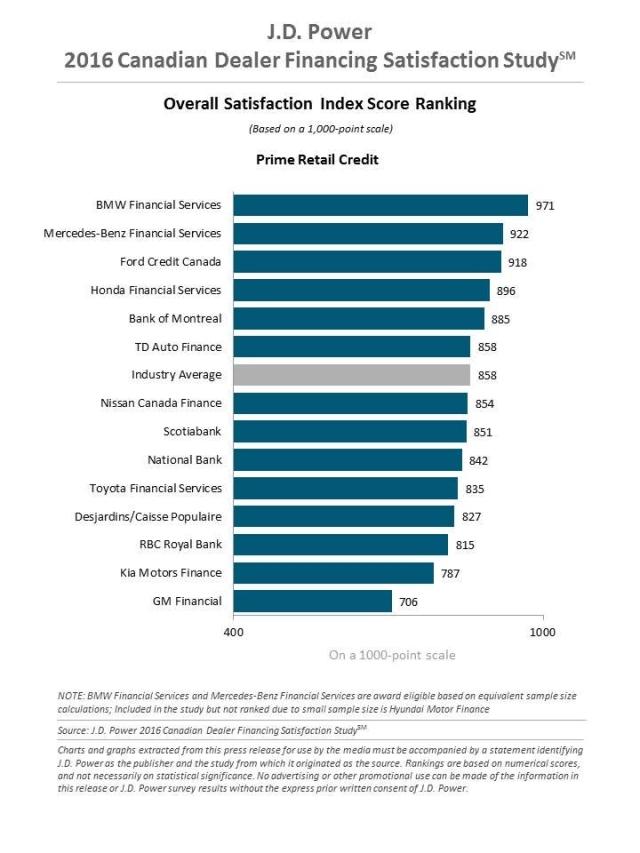