TORONTO: 24 May 2018 — While brick-and-mortar stores lose their lustre in many retail categories, they continue to remain relevant to wireless carriers in Canada, according to the J.D. Power 2018 Canada Wireless Purchase Experience Study,SM released today. Nearly two-thirds (63%) of customers who have purchased a wireless device over the past six months did it in a physical store and are making more purchases in-store, compared with 2017 (2.2 vs. 1.7, respectively).

The study finds that an in-store purchasing experience drives the highest level of customer satisfaction, compared with other channels, and increases year over year. The average customer satisfaction score from an in-store experience is 821 (on a 1,000-point scale), while the online and over-the-phone purchasing experiences yield 815 and 796 points, respectively. In fact, in-store purchasing satisfaction has increased by 22 points year-over-year, compared with a 12-point increase for online and a 13-point increase for over-the-phone.

“The tactile experience and immediate gratification are invaluable to customers who shop for and buy their new device in-store,” says Adrian Chung, Director of the Technology, Media & Telecom Practice at J.D. Power in Canada. “Clearly, the physical store is a very important sales channel for wireless carriers to attract new customers and retain current ones who opt to upgrade their phones. However, this comes with a caveat: in-store representatives’ pressure to up-sell or complete the transaction has a counter effect on customer satisfaction.”

Following are some additional findings from the 2018 study:

The 2018 Canada Wireless Purchase Experience Study examines wireless carriers’ performance across sales-related activities in stores, over the phone and online. Satisfaction is measured in six factors: store representative; online purchase; phone purchase; facility; offerings and promotions; and cost of service. The study is based on responses from 3,605 wireless customers with a postpaid plan from an eligible carrier and who have had a purchasing experience in the past six months. The study was fielded in February-March 2018. 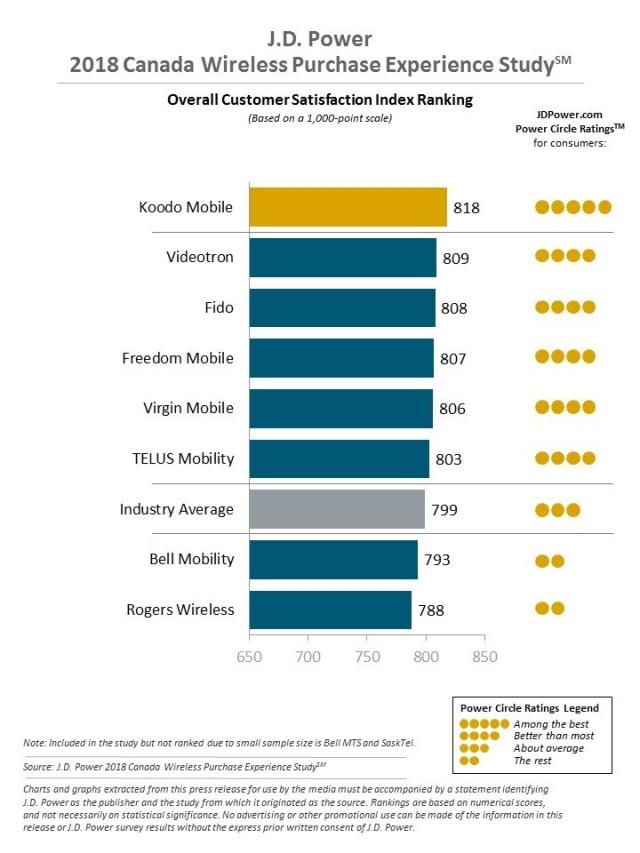