TORONTO: 26 April 2018 —Canada’s wireless providers should take note of the effect their issue-resolution processes have on customer retention. According to the J.D. Power 2018 Canada Wireless Customer Care Study,SMreleased today, 32% of customers indicate that it took a lot of effort to resolve a recent problem with their wireless carrier, while 41% who encountered hurdles in the resolution process are considering—or have decided—to switch their provider.

The study shows that the amount of effort required from a customer to resolve an issue significantly affects their satisfaction with, and impression of, their provider. Overall satisfaction among customers who faced challenges dealing with their wireless provider is 186 points lower (on a 1,000-point scale) than among those who had a seamless experience (652 vs.  838, respectively). Furthermore, customers who experienced an onerous problem-solving process viewed their wireless provider less favorably, perceiving the carrier to be more focused on the bottom line than customer service, unreliable and providing poor value.

“Without a doubt, a seamless customer care experience can positively affect a consumer’s view of their wireless provider and appetite to remain a loyal customer,” said Adrian Chung, Director of the Technology, Media & Telecom Practice at J.D. Power in Canada. “It is no secret that retaining customers is more cost-effective than acquiring new ones. Therefore, Canadian carriers should put a greater emphasis on streamlining the customer care experience and making it as effortless as possible. They should also be extra conscious about utilizing the appropriate contact channels.”

Nearly two-thirds (62%) of customers used their phone as a channel to resolve an issue with their wireless service provider in the past six months. While a phone call is still the most common channel among customers, the use of social media as an option for problem solving is on the rise, especially among younger customers. Nearly one-fourth (23%) of Gen Z[1] wireless customers have used social media to post a question, compared with only 4% of Boomers. Similarly, 24% of Gen Z customers—but only 7% of Boomers—have researched social media for an answer.

“With generational shifts, social media’s role as a preferred channel for problem resolution continues to grow, but the study shows that wireless carriers are not fully able to handle the task yet,” Chung said. “Customers who do their own research on social media platforms are able to solve issues faster than those who post a question and have to wait for answers.”

Following are additional key findings of the 2018 study:

The study was fielded in February-March 2018 and is based on an online survey of more than 5,000 wireless customers. Respondents are residents of Canada with a postpaid wireless service who had a customer service experience in the past six months. 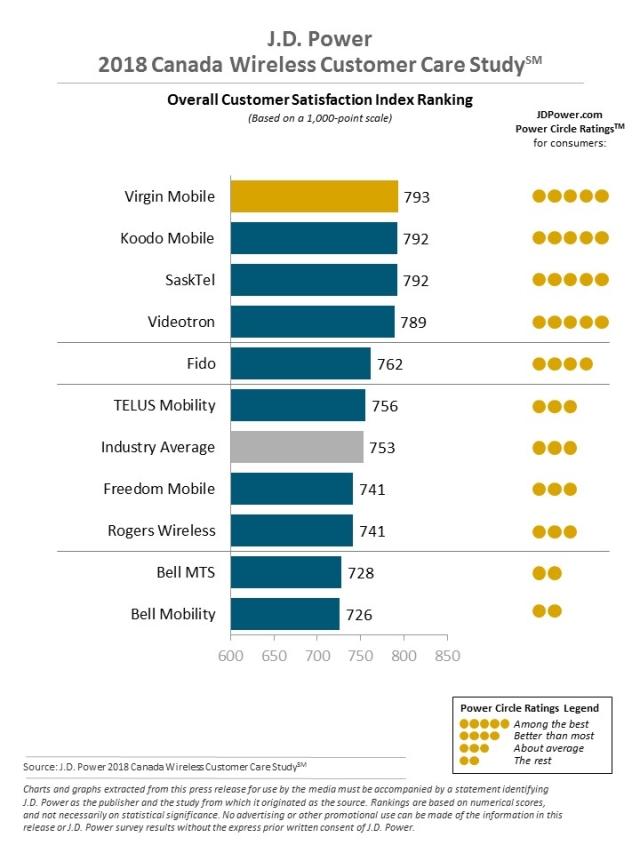