TORONTO: 12 May 2016 — While customer satisfaction with the wireless purchase experience is higher at carrier-branded stores and specialty electronics retailers, one-fourth of consumers choose to shop at big box stores. Among these shoppers, more are likely to purchase an unlocked phone, which is a risk for carriers as these customers are more likely to switch carriers when a better price or data plan offer arises, according to the J.D. Power 2016 Canadian Wireless Purchase Experience Study,SM released today.

The study examines wireless carriers’ performance across sales-related activities in stores, over the phone and online. Satisfaction is measured in six factors: store representative; online purchase; phone purchase; facility; offerings and promotions; and cost of service. Overall wireless purchase experience satisfaction is   761 (on a 1,000-point scale), up 9 points from 2015.

Unlocked Phones Often Purchased at Big Box Stores: While purchase volume is highest at carrier-branded stores (57%), compared with just 25% at big box stores and 17% at specialty electronics retailers, consumers that shop big box stores often buy an unlocked phone off the shelf with no additional fees. Half (50%) of customers who purchase a phone from a big box retailer get an unlocked device, compared with 44% from specialty electronic retailers and just 28% at carrier-branded stores.

High-Risk Customers More Likely to Switch Carriers: Owners of unlocked phones represent a higher risk to carriers as device revenues are lost to other retailers, and these customers are more likely to switch when presented with a more competitive price or promotion. Unlocked devices are an attractive alternative for phone owners because switching costs are lower than they are with locked devices, which cannot be transferred between carriers. Customers owning an unlocked phone are far more likely to switch carriers than those who do not own one. Nearly one-fourth (24%) of customers say they “definitely will” switch carriers in the next 12 months, compared to just 8% of those without an unlocked phone.

“The purchase of an unlocked device puts more control in the hands of the customer,” said Adrian Chung, director at J.D. Power. “While the incidence of purchased unlocked phones remains below that of locked phones, the revenue dollars flowing to different retailers can be significant for smartphones in particular, as customers choose to upgrade devices on their own schedule. To help retain customers and drive return visits, the in-store retail experience needs to demonstrate added value through both service and the range of product offerings.”

Store Representatives Can Make or Break Satisfaction: Satisfaction in the store representative factor is relatively high at specialty electronic retailers (796) and carrier-branded stores (784), but much lower at big box stores (737). The 59-point difference between the highest and lowest performances is attributable to performance gaps in key performance indicators (KPIs) related to the in-store experience, most notably the percentage of times a customer is greeted, notified of possible extra charges or offered an explanation or demonstration of device operations. For example, the incidence of store rep greetings is 78% at specialty electronics retailers, 66% at carrier-branded stores and 51% at big box stores. Incidences of notification about possible extra charges are 72%, 68% and 58%, respectively, and incidences for reps offering to explain or demonstrate device operations are 72%, 69% and 62%.

Following are some additional findings of the 2016 study:

SaskTel ranks highest in purchase experience satisfaction with a score of 798 and improves in most factors year over year. Videotron (796) ranks second, followed by Koodo Mobile (788).

The 2016 Canadian Wireless Purchase Experience Study is based on responses from 6,269 wireless customers. The study was fielded in August-September 2015 (Wave 1) and March 2016 (Wave 2). 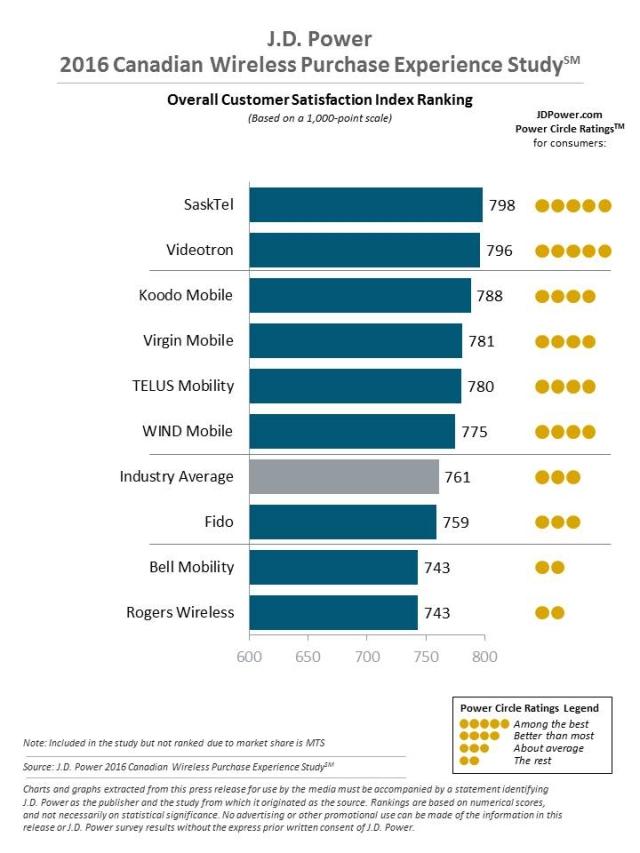 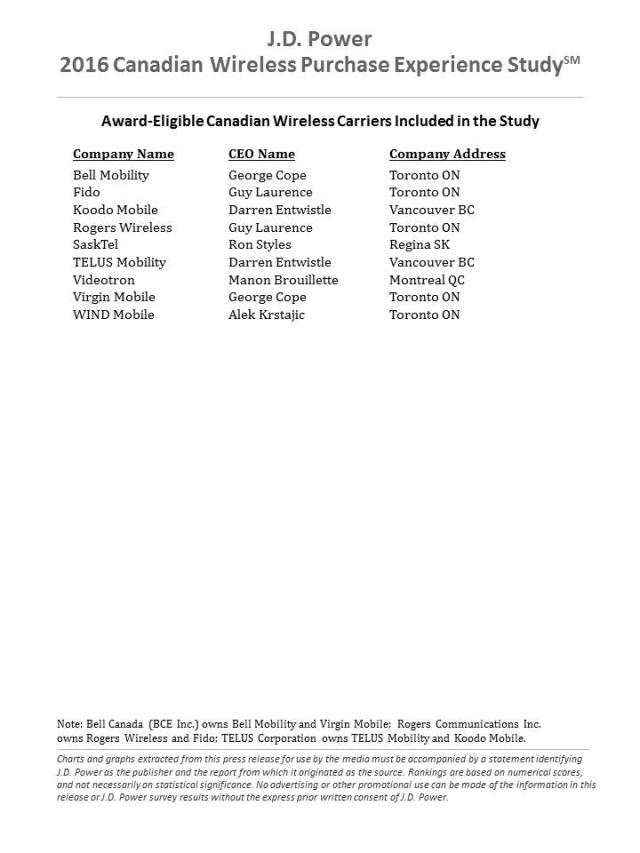