TORONTO: 4 May 2016 — Customer satisfaction with auto insurance in Canada increases for the first time in five years, according to the J.D. Power 2016 Canadian Auto Insurance Satisfaction Study,SM released today. The increase in overall satisfaction comes at a time when there is a significant amount of consolidation in the market.

The study, now in its ninth year, measures customer satisfaction with primary auto insurers in Canada. Satisfaction is measured across five factors (in order of importance): non-claim interaction; price; policy offerings; billing and payment; and claims. Insurers are ranked in four regions (in alphabetical order): Alberta, Atlantic, Ontario and Quebec. Satisfaction is measured on a 1,000-point scale.

Overall satisfaction averages 758 in 2016, up from 750 in 2015 and the same level as in 2014. Improvements in claims (+19 points), non-claim interaction (+13), policy offerings (+6) and billing and payment (+4) contribute to the year-over-year increase in satisfaction. Satisfaction with price improves just 3 points.

“Streamlining processes and improving digital self-service has been a core focus for many insurers as they look to improve the customer experience, and they are starting to see some return on that investment,” said Valerie Monet, director of the insurance practice at J.D. Power. “This is a notable improvement and a step in the right direction; however, it remains to be seen whether insurers can maintain this momentum through the expected significant consolidation in the market ahead.”

Monet noted that there has been considerable consolidation within the market, most recently Aviva’s announcement that it will acquire RBC General Insurance. “The customer experience has the potential to suffer during large, complex mergers, but with careful planning prior to implementation it doesn’t have to,” Monet said. “The one thing that is certain is that customers expect these transitions to be seamless, and as these large insurers merge processes and services, they retain the best traits each brand has to offer, resulting in an improved product and service for the end consumer.”

Much of the improvement noted across the country can be attributed to improvements in process and communication with customers, while very little is associated with more positive perceptions of price. For example, there has been considerable attention given to the cost of insurance given Ontario’s rate reduction strategy, which had a stated goal of reducing rates by 15% by August 2015.

While many customers saw a reduction in their auto insurance premiums, this wasn’t the case for everyone. In fact, the percentage of customers who experienced a rate increase rose to 21% in 2016 from 20% in 2015. Still, Ontario actually posts the most significant improvement in customer satisfaction, compared with other regions—demonstrating that insurance companies can satisfy customers with items beyond price by focusing on the entire customer experience. Price is the only factor that doesn’t increase significantly in Ontario, improving by just 1 index point, yet claims improves by 24 points, non-claim interaction by 14 points, policy offerings by 8 points and billing and payment by 6 points, showing that customers want value over merely a low price.

“Rate reductions rarely affect every customer equally, with lower-risk customers, who typically have lower rates to start with, frequently being the first, and sometimes only, customers to see an actual price decrease,” said Monet. “Improvements in process and customer service benefit everyone and drive the overall improvements noted in Ontario.”

Customer satisfaction in the Alberta region averages 743, up 8 points from 2015. The Co-operators ranks highest in satisfaction in Alberta for a third consecutive year, with a score of 777. TD Insurance ranks second (754).

In the Atlantic region, customer satisfaction averages 768, up 6 points from 2015. The Co-operators ranks highest with a score of 797. Intact Insurance ranks second (780).

Customer satisfaction in the Ontario region averages 753, up 9 points from 2015. The Co-operators ranks highest with a score of 781. State Farm ranks second (768) and Intact Insurance third (764).

In the Quebec region, customer satisfaction averages 786, up 3 points from 2015. The Personal ranks highest for a fourth consecutive year, with a score of 820. Industrial Alliance ranks second (809) and Promutel third (797).

The 2016 Canadian Auto Insurance Satisfaction Study is based on responses from nearly 11,000 auto insurance policyholders. The study was fielded between January 21 and March 7, 2016. 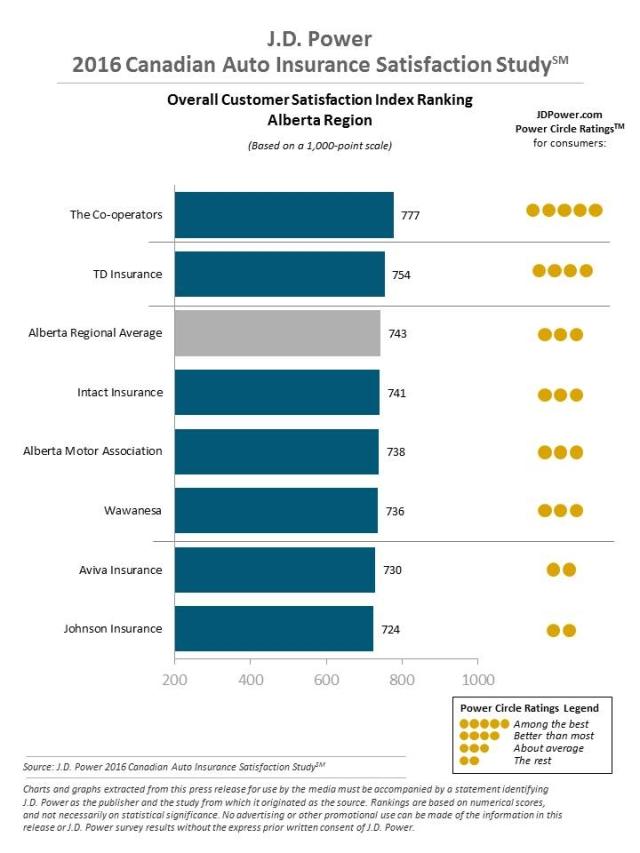 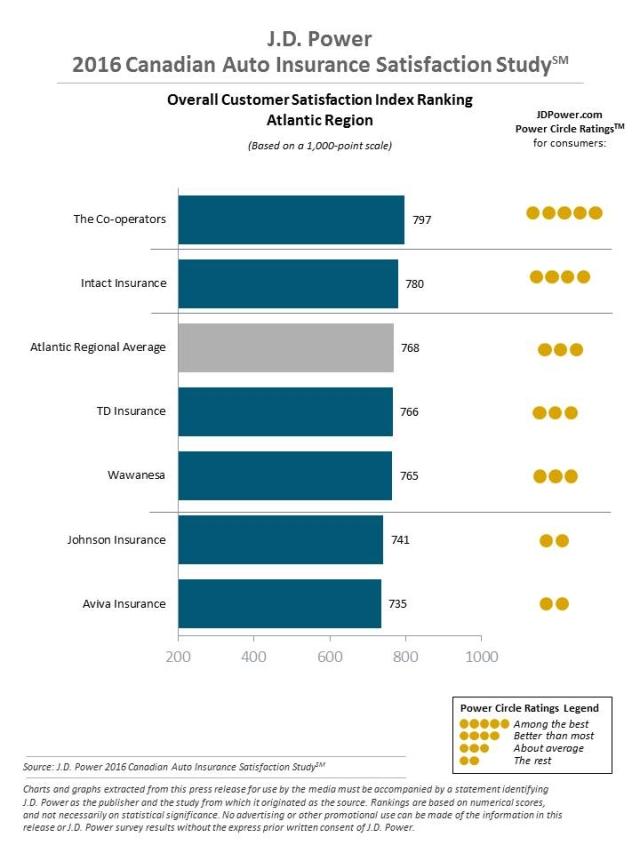 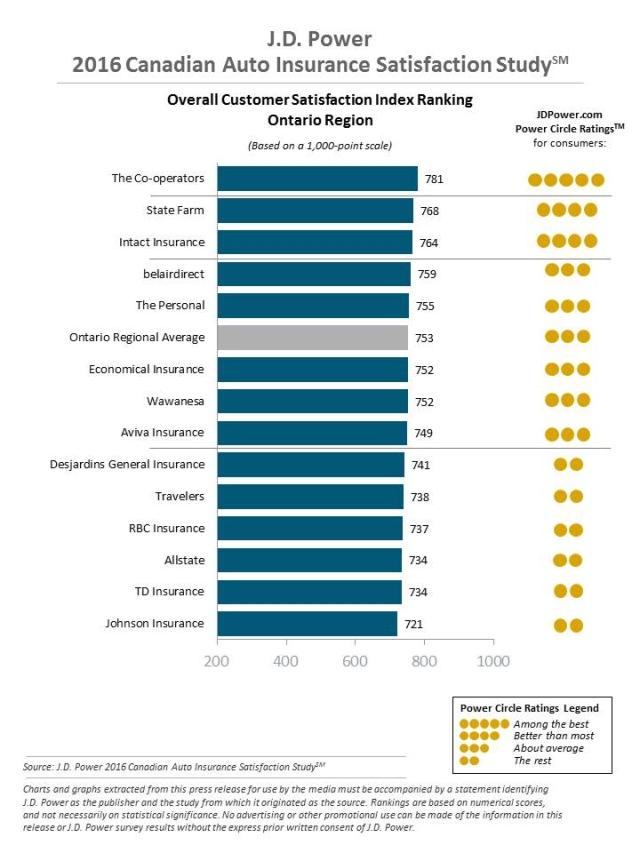 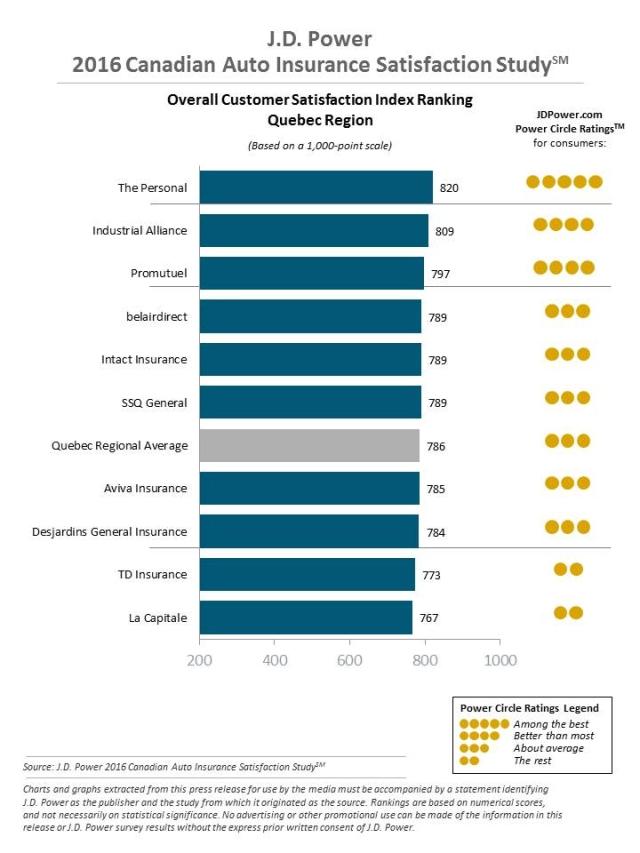