WESTLAKE VILLAGE, Calif.: 13 July 2015 — Satisfaction among Canadian auto claimants declines significantly due to dissatisfaction with the process for drivable claims—those which are submitted for vehicles that do not require a tow—according to the J.D. Power 2015 Canadian Auto Claims Satisfaction StudySM released today.

Now in its third year, the study measures customer satisfaction with the claims process for auto physical damage loss. Depending on the complexity of the claim, claimants may experience some or all of the following factors that drive overall satisfaction: first notice of loss; service interaction; appraisal; repair process; rental experience; and settlement. Satisfaction is calculated on a 1,000 point scale.

The study finds that repairs are less likely to be completed when promised in 2015 than in 2014 (80% vs. 83%, respectively), underscoring the need for insurers to better manage repair timing expectations. Additionally, the time it takes to receive the final settlement payment has increased by more than one day from 2014 (15.5 days vs. 14.2 days, respectively). Just one in five (18%) claimants with a drivable claim say the claim took a shorter amount of time than expected, compared with 21 percent in 2014. However, more claimants are negotiating their settlement this year, increasing to 17 percent from 13 percent in 2014.

“Whether it’s a drivable claim or something more complex, dealing with an auto claim is a major disruption in someone’s daily routine,” said Valerie Monet, director of the insurance practice at J.D. Power. “To help get customers through the stress of it all, it’s vital that insurers clearly explain the claims process so they know what to expect. One way this can be accomplished is by providing a reasonable and accurate time frame for when the repairs will be completed. Not only can this help put claimants at ease, but it can also educate them on the process. Providing an explanation of the process can improve satisfaction with the overall claims experience and also reduce the need for negotiations between the claimant and insurer later in the process.”

Among the award-eligible insurance companies included in the study, Intact Insurance ranks highest in overall customer satisfaction with an index score of 812, performing particularly well in the first notice of loss, service interaction and settlement factors.

Following Intact Insurance in the rankings are The Co-operators (810); Belairdirect (789); and Desjardins General Insurance (787).

The 2015 Canadian Auto Claims Satisfaction Study is based on responses from more than 2,500 auto insurance customers in Canada who settled an auto insurance claim within the past 12 months. The study excludes claimants whose vehicle incurred only glass/windshield damage or was stolen, or who filed a roadside assistance claim only. The study was fielded between February and April 2015. 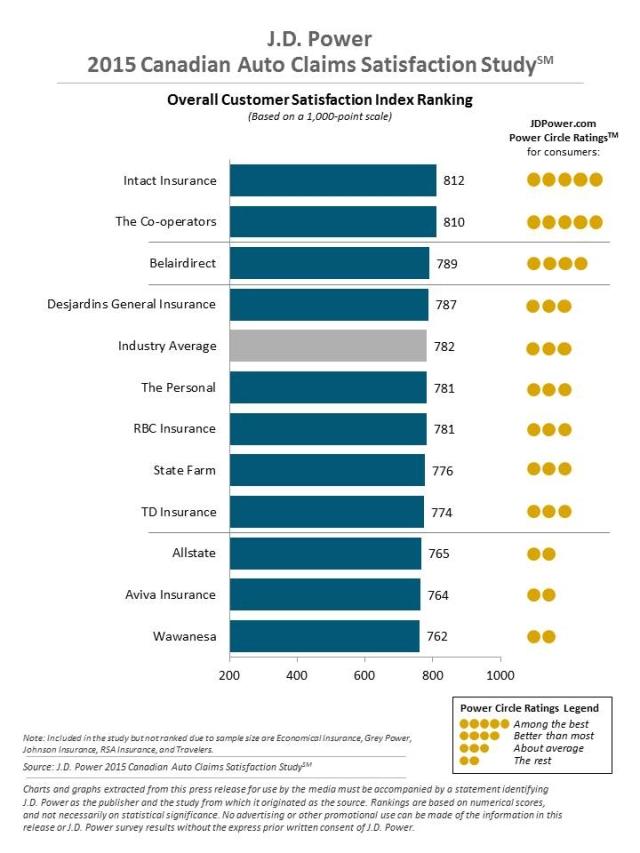