“There’s more to a satisfying rewards program than just the amount of points, miles or cash card holders can earn,” said Jim Miller, Vice President, Banking and Credit Card Practice at J.D. Power. “Understanding how to redeem rewards—and having redeemed rewards recently—has a significant effect on satisfaction and loyalty levels. As such, card issuers need to educate card holders on how to redeem their rewards and design programs in a manner that encourages frequent redemptions.”

According to the study, 64% of card holders say they completely understand how to redeem rewards. Overall satisfaction is 87 points higher among this group than among card holders who say they do not fully understand how the system works (796 vs. 709, respectively, on a 1,000-point scale). Furthermore, rewards redemption and frequency also contribute to higher satisfaction and loyalty levels. Satisfaction is higher among card holders who realized tangible benefits by redeeming rewards in the past month (792), compared with satisfaction among those who redeemed 1-3 months ago (780); those who redeemed more than a year ago (753); or those who have never redeemed (740). Cash back and airline tickets are the top two rewards card holders choose.

Within this context, it was recently announced that Air Canada, TD Bank, CIBC and Visa Canada jointly plan to buy Aeroplan, a coalition loyalty program. (Approximately 10% of card holders in Canada use an Aeroplan card as their primary credit card.) Prior to the announcement, the uncertainty surrounding Aeroplan was seen to have affected customer satisfaction.

“Air Canada buying Aeroplan is good news for Aeroplan card holders,” Miller added. “The Aeroplan program will move to a new Air Canada rewards program in 2020. It will be critical for the airline and credit card partners to build a new rewards program that is transparent and easy to understand.”

“Usage and understanding of mobile apps have a strong correlation to customer satisfaction,” Miller said. “This, coupled with a higher adoption rate of mobile platforms by younger card holders, signals the future for credit card issuers. To gain a competitive advantage, issuers should focus on improving their mobile offerings and on educating their card holders about the benefits and security they provide.”

President’s Choice Financial ranks highest in overall customer satisfaction, with a score of 788, which is 30 points higher than the industry average (758). American Express (780) ranks second and Canadian Tire (774) ranks third. 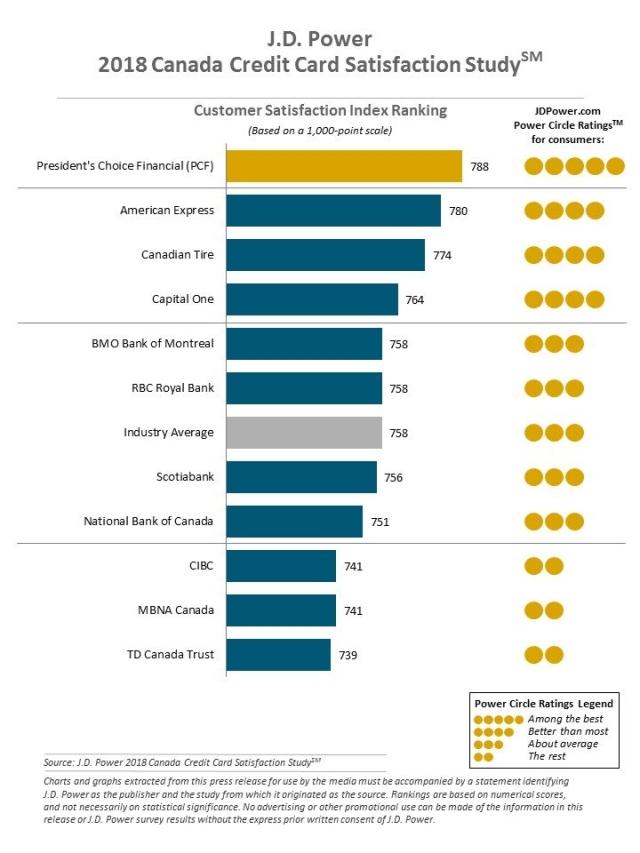