Toronto: 20 Oct. 2022 — Rising inflation and interest rate hikes are taking a toll on the financial health of bank customers in Canada1and are eroding satisfaction with the banks, according to the J.D. Power 2022 Canada Retail Banking Satisfaction Study,SM released today. The study revealed a noticeable decline in satisfaction in July-August 2022 (wave 2) from January through March 2022 (wave 1) as the percentage of customers classified as financially healthy dropped to 38% from 50%, respectively. The worsening financial health was most prominent among bank customers age 40 and older.

With about three in four customers acknowledging the rising cost of goods and services outpacing their income and two in three taking some action to manage inflation, it seems that the banks have not adapted yet to customers’ shifting needs and expectations. According to the study, only 32% of customers feel their bank completely supports them in challenging times, the most influential key performance indicator (KPI) affecting satisfaction.

“Canadian banks have not kept pace with the changing economic conditions nor the shifting needs and expectations of their customers, at least when it comes to communicating,” said Jim Miller, executive managing director, banking & payments intelligence at J.D. Power. “Customers are focused on mitigating the challenging economic conditions, and banks need to meet them where they are—not where the banks want them to be.”

Only 20% of customers recall their banks communicating with them on how to manage inflation or save for a recession, and even fewer (18%) recall messages about paying down debt in a recession, with only 6% of customers acting on this communication. At the same time, the study shows a greater appetite from bank customers for more guidance from their financial institutions such as wishing to get advice from their bank about strategies to manage inflation (31%); how to best save for a recession (30%); or how to pay down debt in a recession (26%).

Following are some key findings of the 2022 study:

RBC Royal Bank ranks highest in satisfaction among Big 5 Banks for a third consecutive year, with a score of 629. CIBC (615) ranks second and BMO Bank of Montreal (610) ranks third.

The Canada Retail Banking Satisfaction Study, now in its 17th year, measures customer satisfaction with Canada’s large and mid-size banks. The scores reflect satisfaction among the entire retail banking customer pool of these banks, representing a broader group of customers than solely the branch-dependent and digital-centric segments. The study was redesigned for 2022 to measure satisfaction across seven factors (in order of importance): trust; people; account offerings; allowing customers to bank how and when they want; saving time and money; digital channels; and resolving problems or complaints.

The study is based on responses from 14,013 retail banking customers of Canada’s large and mid-size retail banks regarding their experiences with the financial institutions. The study was fielded in two waves from January through March 2022 and from July through August 2022.

1J.D. Power measures the financial health of any consumer as a metric combining their spending/savings ratio, credit worthiness and safety net items like insurance coverage. Consumers are placed on a continuum from healthy to vulnerable. 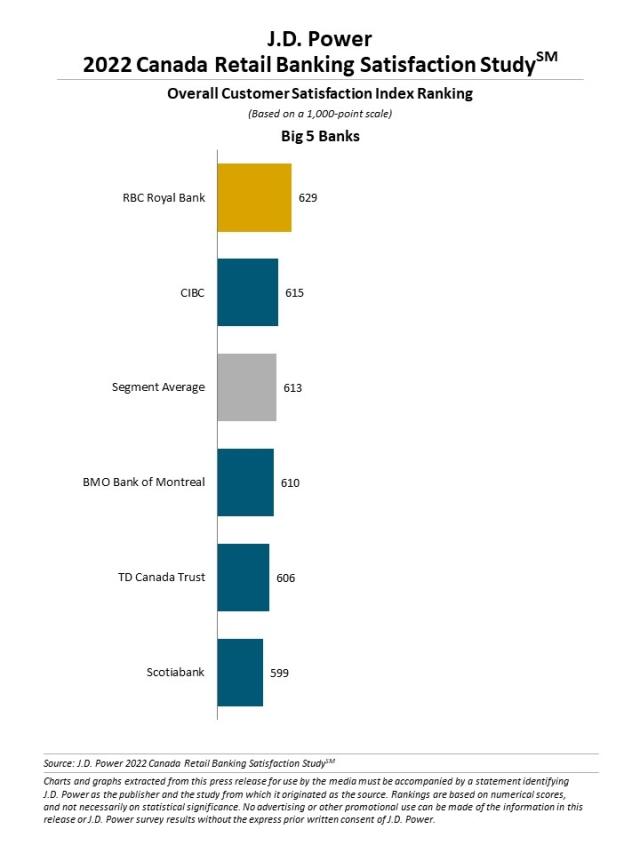 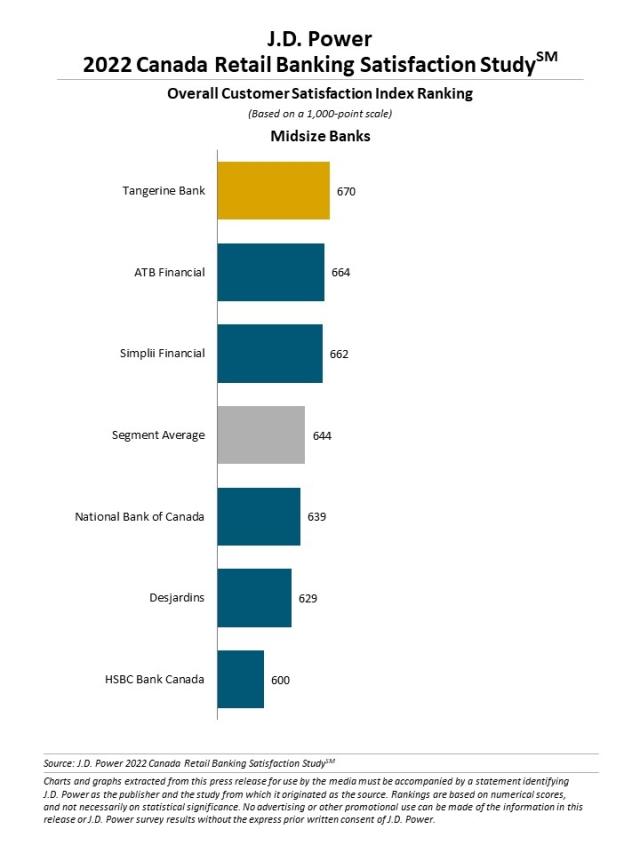