Despite the North America airline industry losing more than $40 billion in revenue as passenger volume dropped 60% in 2020, airline passengers say their level of satisfaction is higher. According to the J.D. Power 2021 North America Airline Satisfaction Study,SM released today, the elimination of many charges and fees, increased attentiveness of flight crews and ticket flexibility help the industry achieve new heights as passenger satisfaction climbs 27 points to 819 (on a 1,000-point scale) year over year.

“The airline industry adapted to a most unusual year by simplifying ticketing processes, waiving change fees and baggage fees which were key to persuading people to fly during the pandemic,” said Michael Taylor, travel intelligence lead at J.D. Power. “Airline personnel rose to meet the challenges of a drastically altered travel environment. Maintaining that level of flexibility and recognition of individual passenger needs will be a strategic advantage for airlines that want to set themselves apart in passenger satisfaction as travel volumes start to recover.”

Following are some of the key findings of the 2021 study:

The North America Airline Satisfaction Study measures passenger satisfaction with airline carriers in North America based on performance in eight factors (in alphabetical order): aircraft; baggage; boarding; check-in; cost and fees; flight crew; in-flight services; and reservation. The study measures passenger satisfaction among both business and leisure travelers and is based on responses from 2,309 passengers. Passengers needed to have flown on a major North America airline within the past month of completing a survey. The study was fielded from August 2020 through March 2021.

J.D. Power is headquartered in Troy, Mich., and has offices in North America, Europe and Asia Pacific. To learn more about the company’s business offerings, visit JDPower.com/business. The J.D. Power auto shopping tool can be found at JDPower.com. 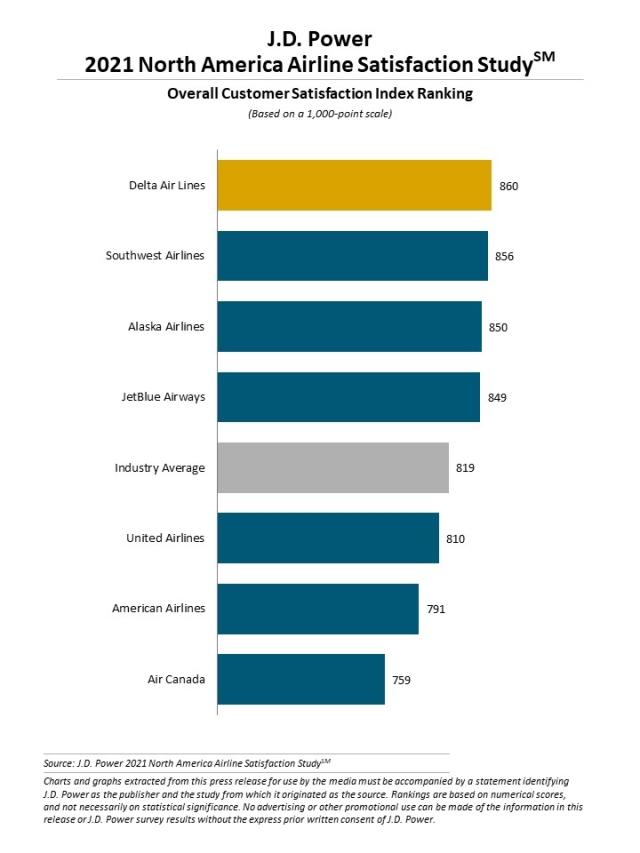